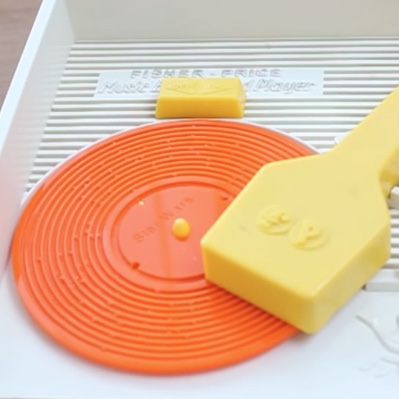 Instructions for creating your own custom records for a four-decade-old Fisher Price toy, using either a CNC router or 3D printer.

The toy is simple enough. A quick inspection reveals that the “head” of the record player’s arm is a tiny musical box with 22 metal gears. The record has 11 groves and pins on either side that operate one of the 22 notes. Each groove forms a circle so the tune repeats once per revolution - there’s no spiral track like we used to have on real vinyl records. It did take quite a while with some digital calipers to accurately measure the position of all the grooves and the holes that locate the disc on the turntable. All these measurements you’ll find either in the 3D models I used to create the record blanks or the code that generates the music information.

There’s a video of a couple custom records being played on the toy, including the Star Wars theme. Interesting stuff!