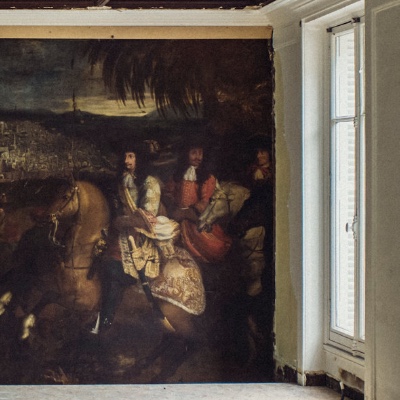 The Treasure Behind the Wall

“‘We made a discovery,’” he remembered her saying. On the other end of the phone, Mr. Bolen cringed. The last time he received a call like that about a store, their plans to move a wall had to be scrapped because of fears the building would collapse. He asked what, exactly, the discovery was.

“You have to come and see,” she told him.

So, gritting his teeth, he got on a plane from New York. Ms. Ryan took him to the second floor of what would be the shop, where workers were busily clearing out detritus, and gestured toward the end of the space. Mr. Bolen, she said, blinked. Then he said: “No, it’s not possible.”

Something had been hidden behind a wall, and it wasn’t asbestos. It was a 10-by-20-foot oil painting of an elaborately coifed and dressed 17th-century marquis and assorted courtiers entering the city of Jerusalem.

Sometimes a 10-by-20-foot oil painting just, you know, turns up.